Origin of name: From the Iroquois Indian word for "good river". 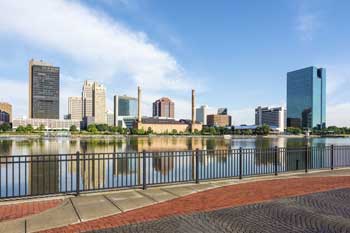 The region north of the Ohio River and south of the Great Lakes, foremost state admitted to the Union, the slice of Midwest, a multi regional and multi cultural state, Ohio is famous for more than a few reasons. The state is ranked 34th in terms of land area (116,096 square kilometers) and 7th due to its dense population (11, 353, 140 approximately).

The state of Ohio is diverse and has something for its every visitor. The northern side of Ohio borders onto Lake Erie that not just accounts for a 312 miles long coastline but also for abundant water recreation in the region. Visitors are also thrilled by the larger than life roller coasters found in various amusement parks such as Cedar Point in Sandusky, Paramount?s Kings Islands near Cincinnati etc. scattered in the state. Ohio cities are timeless vacation destinations. The largest city of the state is Columbus. This is also the historic capital of the state. The city is named after the discoverer Christopher Columbus. Located in the rural heart of the state, the city is the home to the big Ohio State University and is the only center of culture for a nearly three-hour drive in any direction.

The city of Cincinnati has fascinated many renowned individuals such as Winston Churchill who hailed it as the most beautiful inland city in the union. Cincinnati appeared to be thriving and animated to the famous author Charles Dickens and for Longfellow Cincinnati became the Queen City. Besides scenic beauty Cincinnati offers a variety of wonderful museums like the Cincinnati Museum Center, Cincinnati Museum of Natural History etc., restaurants, sporting venues such as the Great American Ball Park.

Apart from countless attraction, Ohio has a rich historical background too. The state was originally inhabited by several native tribes. The Miamis, Wyandots, Delawares, Shawnees, Ottawas and Eries formed the local people in the region. The area would have remained under these tribes if at the time of European colonization, the Iroquois federation of the New York area had not claimed the region that included the present day Ohio territory.

For a long time the Ohio territory had no American settlements due to the British regime. But as the Americans overpowered the British during the American revolution, the British was forced to cede Ohio and the area west to the Mississippi river to the united states.

In 1787 the United States created the Northwest Territory. The creation took place under the northwest ordinance or the freedom ordinance that abolished slavery from the entire American region.

When Ohio was about to acquire the status of statehood, the Indiana territory was created from it. The sectioning of this part reduced the Northwest Territory to the existing Ohio state along with some other areas from the Lower Peninsula of Michigan.