Origin of name: Idaho is a coined or invented word, and is not a derivation of an Indian phrase "E Dah Hoe (How)" supposedly meaning "gem of the mountains. 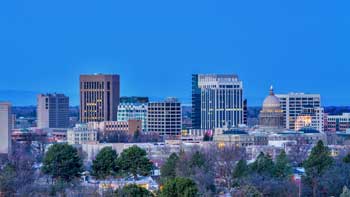 Spreading in 216,632 square kilometers and inhabiting a population of 1,293,953, Idaho is a state in the Pacific Northwest of the United States. The territory of Idaho had its foremost human settlements around 14,500 years ago. The excavations at Wilson Butte close to the Twin Falls in 1959 depicted human activity. During this time the prominent tribes were Nez Perce and the Northern and Western Shoshone in the north and south respectively.

On 12th august 1805 the Lewis and Clark expedition made its way to Idaho. It is deemed that a group led by the Wilson Prince Hunt was the first expedition to enter the southern Idaho. This expedition navigated the Snake River in 1811 and 1812. 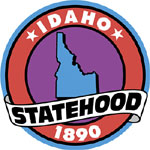 The initial settlers in the Idaho region showed keen interest in fur trading and the missionary work. This led to the foundation of the Kullyspell House in 1809. This house was the first white-owned house establishment and fir-trading post in Idaho. In 1836 Henry H Spalding established a mission close to Lapwai, published his first book there and developed first irrigation system. Between 1848 and 1853 the Catholic missionaries and Coeur d?Alene tribe led to the construction of the oldest standing building in Idaho, the Cataldo.

In 1848 the Oregon region incorporated the present day Pacific Northwest states and the Continental Divide. In 1846 the present territory of Idaho was divided into two. In 1859 the state was reunited after Oregon became a state and the boundaries of the Washington Territory were founded again.

In 1849 during the California gold rush there were many settlements in Idaho. In 1860 the Mormon pioneers founded the first organized town in Idaho. By the end of 1860 Idaho witnessed several gold rushes and the profession of mining experienced an unprecedented surge.

On 4th March 1863 president Abraham Lincoln signed an act creating Idaho Territory from parts of Washington territory and Dakota Territory with its capital at Lewiston. Originally within the Idaho boundaries were the present day states of Montana and Wyoming. It was in 1868 that Idaho got its existing boundaries.

In 1865 Boise replaced Lewiston as the territorial capital. This gave birth to feelings of sectionalism in the people of the state. In 1887 Idaho territory was almost legislated out of existence but president Grover Cleveland denied to sign the bill to split the Idaho region between Washington in north and Nevada in south.

At present Idaho has progressed to a great extent and is doing well in all areas. It is an ideal vacation destination. As the name suggests, Idaho meaning the gem of mountains, Idaho is covered with huge mountain ranges, white- water rivers, steep gorges and highland lakes. Idaho is a hub of rock climbers, river runners, skiers and backpackers.