Origin of name: From the Channel Isle of Jersey. 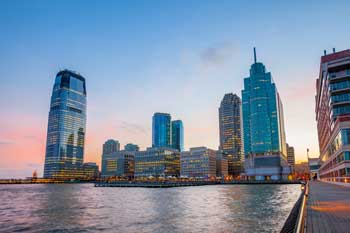 With a land area of mere 22,608 square kilometers this fourth smallest state of the United States is densely populated state (8,717,925 being the approximate population) offers several interesting sites and places to visit.

The state got its name from the island of Jersey in the English Channel. Officially the state is reckoned as the Garden State. Geographically New Jersey is taken to be a part of the Mid-Atlantic region of the United States. On the north of the state is the famous city of New York, on the south is the Delaware state, Atlantic Ocean on the east and Pennsylvania on the west. New jersey has a rich history to its name. The state was once inhabited by the Lenape Native Americans. In the beginning of 1630 the Dutch people settled the state. In those days the boundaries of New Jersey did not resemble to present date boundaries and were also not clearly defined. Much of what is New Jersey now formed a Dutch colony of the New Netherlands then.

In 1664 the entire New Jersey territory came under British governance. This happened when this Dutch colony was invaded by the British Colonel, Richard Nicolls. Though he encountered some resistance yet he successfully overpowered the territory.

At the time English Civil war was going on, the Channel Isle of Jersey gave complete support to the English Crown. Later King Charles II of England divided the North American lands among his brothers and friends.

On 18th march 1673 Berkeley sold off almost half of the New Jersey to the Quakers in England. Qaukers further established the Delaware Valley region as Qauker Colony.

In the 19th century though New Jersey initially declined to sign the Constitutional Amendments in favor of abolishing slavery and permitting rights to the Black Americans yet on 15th February 1804 New Jersey became the last northern state that condemned and abolished slavery.

Even though none of the American civil war battles happened on the land of New Jersey still the state made a remarkable contribution to the war in terms of the supply of soldiers.

In history New Jersey is also known for its opposition to the election of Abraham Lincoln for the post of president. George McClellan became the governor of the state.

In the 20th century new jerseybecame the main state for the defense of the cold war. The state suffered greatly due to the Great Depression but over the years it has progressed and achieved remarkable success in various sectors.