Origin of name: Named after England's Duke of York. 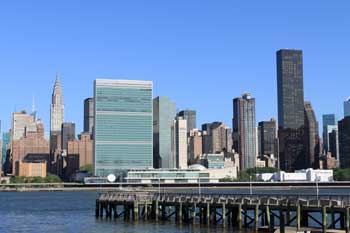 The land of one of the wonders of the world, the Statue of Liberty, the northeastern United State and its largest city of the same name, New York, stands in need of no introduction. The state ranks 27th in terms of land area and 3rd because of its dense population.

New York State offers most spectacular views on earth and is an unmatched symbol of American ingenuity and Art Deco architecture. The state's Empire State Building is a US National Historic Landmark, the Peter Clark designed Great Stage at Radio City Music Hall which is acclaimed as the most innovative and technically advanced stage in the world, the Adirondack State Park that is larger than any national park in US, the Niagara Falls on the Niagara River as it connects the river Erie and Ontario and many more such outstanding attractions, make New York State visit a lifetime experience. 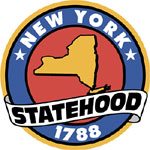 The New York City also known as the Big Apple is America's largest city and reigns as the capital of the world. It is deemed to be an economic powerhouse that offers varying means of education and entertainment. Though completely moved by the 9/11 tragedy, New York city is still and will continue to be reckoned as the city that never sleeps.

New York is bordered by two Great Lakes namely Erie and Ontario, the provinces of Ontario and Quebec in Canada, Vermont, Massachusetts and Connecticut, the Atlantic Ocean and the two mid Atlantic states of New Jersey and Pennsylvania.

New York State has a great historical significance too. The state was first inhabited by the Dutch people in 1613. The Dutch named this colony as New Amsterdam. After the present country Suriname, in the northern South America, was traded for New Amsterdam, the colony was renamed as New York. The name as kept in the honor of Duke of York.

In 1983 the government of the state was reorganized and the New York territory was extended further.

In 1613 the Dutch people demanded control over the territory that acted as a link between the Connecticut and the Delaware rivers. This area was named as New Netherlands.

In 1663 the Duke of York purchased the grant of Long Island and other islands on New England coast. In 1664 he prepared an armed expedition that took possession of New Amsterdam and was then renamed as New York. The Duke's victory was further confirmed in 1667 by the treaty of Credo. In 1674 the Treaty of Westminster brought back the English control over the territory. This happened after the Dutch fleet recaptured New York in 1673.