Origin of name: Taken from "Carolus," the Latin word for Charles and named after England's King Charles I. 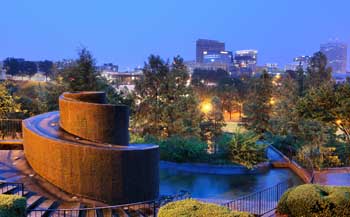 Situated on the east coast between North Carolina and Georgia, across the Savannah River, to the east of the Atlantic Ocean, South Carolina is one of the adorable states in the United States. Also known as the Palmetto State, this state in the southern region of United States offers many seaside resorts on the Atlantic that gel up sandy beaches with an historical center, sites worth visiting and admiration.

The historical monuments in the state speak of its glorious past. Visitors can update themselves with the origins of the state and the life of people living here in early days. The cobbled streets of Charleston, the 18th century mansion, a ferry ride to Ft. Sumter (the place where civil war had commenced) are paradigm joints to take a plunge into the history of the state. Walking down from the roads of history, the coastal city of Myrtle Beach is a place where all the individuals devoted to various activities can rejuvenate their spirits. The city is known for the plethora of sports such as golf, swimming etc. it offers. Besides this the Grand Strand of which the Myrtle Beach is a part, is a hub for all the couples who desire to share some precious and memorable moments with each other.

But this is not all. The upstate South Carolina is a different experience all together. The Blue Ridge Mountains in the region are a host to various adventurous activities such as hiking and camping.

People also come to see the historical site of Greenville, which is located to the north of the mountains and was once the textile center of the world. At present the place has more than sixty city parks and historically relevant areas.

The capital city of the state, Columbia is an all time pull. It is also the largest city of the state. Carolina is an upcoming town that is also a mirror to the earlier days of the state. Sites such as the Capitol Building, statue of George Washington etc. tell different tales of what had happened in the past.

According to the rich history of the state, the early settlers in the region were a group of English people. In fact the state was settled by the English settlers. These people were sent in 1670 by the Lord Proprietors. After them the French Huguenots entered the state.

In settling and developing the upcountry of South Carolina, the Scotch Irish migrants played a crucial role. These people had migrated from Pennsylvania and Virginia.

In 1712 South Carolina became a royal colony. It was bifurcated in 1729. On 15th march 1776 was freed from the control of Great Britain. On the very day the state formed its own government too. On 5th February 1778 South Carolina was hailed as the first state to ratify the foremost constitution of the United States.