Origin of name: Based on Choctaw Indian words for "red man". 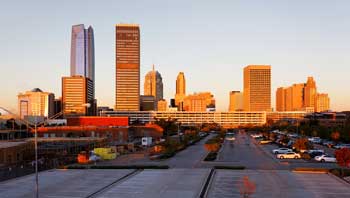 The land of vibrant events such as rodeos and pow wows, world class museums (like National Cowboy and Western Heritage Museum) and roller coasters, zoos, lush green forests and hills, sturdy mountains and much more, Oklahoma is a perfect vacation destination. The breathtaking beauty, beautiful sites, exciting activities and other lures that Oklahoma offers are unique and interesting for every visitor.

Also known as OK (abbreviated form of Oklahoma), the state is bounded on the east by Arkansas and Missouri, on the north by Kansas and northwest by Colorado, on the west by New Mexico and on the south by Texas. 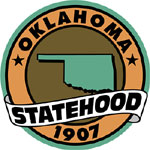 Oklahoma is a big and thickly populated state, its land area and population being 181,196 square kilometers and 3,450,654 (approximately) respectively. The capital of the state is the Oklahoma City.

The state of Oklahoma has a rich history too. According to historians the Native Americans occupied the land before the 16th century. In 16th century Spanish explores came in the area and so the Europeans visited the region for the first time.

The Oklahoma state derives its name from the language of Choctaw people. During 1800 the United States government had detached these people from Mississippi to Indian Territory. The name was given by Allen Wright, the Principal Chief of the Choctaw Nation. The term Oklahoma is a composed of two Choctaw words "okla" meaning people and "homa" which means red.

During 1830 Oklahoma was an Indian territory that served as the relocation area for the policy of Indian Removal.

On 16th November 1907 the Oklahoma Territory joined the Indian Territory and became the 46th state of the United States. The Oklahoma territory soon became popular due to adopting world's longest constitution of government.

During the 20th century the territory witnessed a development in trade as oil business began to get underway. There were significant political changes in the state. Several political groups emerged and each tried to acquire power and dominate the state.

In 1931 the border dispute between Oklahoma and Texas ended and the Oklahoma National Guardsmen and Texas Tangers were deployed in the area. This border dispute had continued since a long time and was permanently dissolved on 6th august 1931 with the permanent dissolution of the first injunction.

In 1995 Oklahoma suffered due to bombings in the state's capital. The Oklahoma City bombing was a terrorist attack on the state that shook it completely