Origin of name: Based on the Iroquois Indian word "Ken-tah-ten", meaning "land of tomorrow". 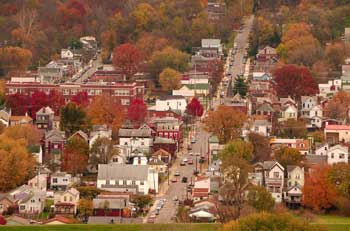 Kentucky, the Bluegrass State had no permanent settlement prior to 1750. The land was used as sacred hunting grounds by the roving bands of Native Americans. After 1770 the state had its first set of permanent inhabitants. They were people from Virginia and North Carolina who had come via the Cumberland Gap.

After a while the residents of the Kentucky County demanded a separation from Virginia. As a result ten constitutional conventions were held in the Constitution Square Courthouse in Danville. These conventions commenced in the 1784 and rolled on till 1792. 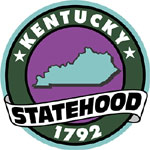 However in 1790 the Kentucky delegates took a big step in this direction. They accepted the Virginia's terms and conditions of separation. As a result a Kentucky state constitution was drafted in 1792 at the final convention.

On 1st June 1792 Kentucky was blessed with the status of fifteenth state of union. Isaac Shelby was the foremost governor of the commonwealth of Kentucky. Isaac was an officer in the American Revolutionary War, a military veteran from Virginia.

At the time of the American Civil War (a war fought between the United States of America or the Union and the Confederate States of America formed by eleven Southern states that had announced their secession from the Union) Kentucky served the union as border state. The state remained unbiased and did not disaffiliate itself till the time a new legislature was formed. On 5th august 1861 a new legislature took office. This legislature was thoroughly supported by the states of the union.

In 1862 during the Kentucky campaign of generals Braxton Bragg and Edmund Kirby Smith the state witnessed the entering of the Confederates. Due to Bragg's retreat because of the Battle of Perryville that was fought on 8th October 1862, Kentucky came under the governance of the Union Army till the time the war got completely over. In consequence to this the state left its neutral standpoint and gave full support to the Union.

Time has passed and confronting numerous ups and downs this Bluegrass state has progressed to a great extent. Today it is one amongst world's best vacation destinations. The lush green groundcover grass, polished white fences and sturdy attractive horses that are some of the best horses in the world, add to the flavor of globally known horse racing in the state. The other pulls of the state are its wonderful music, folk art, sight seeing especially the Appalachian Mountains, historical monuments and museums and dense forests.