Origin of name: Land of the Indians. 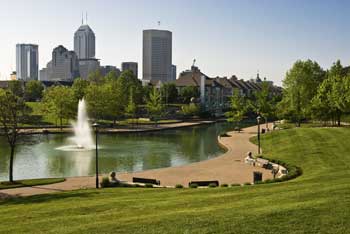 Indiana is the mid-western state of the United States. Covering an area of 94,321 square kilometers Indiana is bordered on the north Lake Michigan and the state of Michigan, on the east by Ohio, on the south by Kentucky and on the west by Illinois.

Indiana is the land of a spectrum of adventures ranging from arts and culture to sports such as car racing. There are exciting getaways, outdoor recreation, rich history and heritage, cultural events and festivals, antique and art shopping in world class museums, remarkable hospitality of the natives and much more to keep the visitor glued to the state. 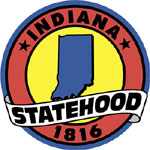 The beautiful capital of Indiana, Indianapolis is an attraction in itself. Indianapolis is the largest city of Indiana. The city is famous worldwide for hosting biggest races in the nation such as 500 in May and the Brickyard 400 in August. These races and other pulls like Indiana State Museum, National Art Museum with archaic Greek sculptures depicting Olympic athletes and other events draw hordes of people every year to Indiana.

Indiana is a densely populated state, its approximate population being 6,080,485. Out of this around 791,926 people are nestled in the capital Indianapolis.

According to historians the origins of Indians can be traced much before 100-400 CE. Indiana was established prior to the development of the Hopewell culture. During that time Mississippian culture prevailed in this region. Tribes named Miami and the Shawnee primarily inhabited the region then.

In 17th century New France claimed the Indiana region. The land was then handed over to the Kingdom of Great Britain. This was a result of the decision taken at the end of the French and Indian war. The French and the Indian war is a common American name for a decisive nine year long conflict between the Kingdom of Great Britain and its North American colonies against France and North American conflicts. The war started in 1754 and continued till 1763.

After the famous American Revolution that did put an end to two centuries of rule of the Thirteen Colonies by the Kingdom of Great Britain and led to the creation of contemporary United States of America, the Indiana territory came under the governance of the United States of America. After sometime land of Indiana became a part of the Northwest Territory and soon became the Indiana territory.

In 1816 the Indiana territory became a member of the Union. It was settled as the 19th state of the United States.

Over the years Indiana has made considerable progress in different fields. With a fast growing economy, the state has witnessed a considerable development in its tourism industry, education, sports teams and events, military installations etc. too.