Origin of name: From the Sioux Indian for "south wind people". 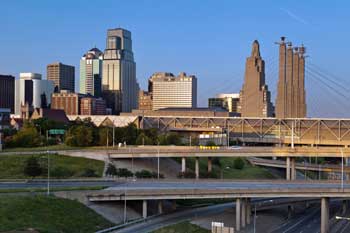 Kansas is a Midwestern state in the United States. North of Kansas is situated the Nebraska state, on the east is Missouri, Oklahoma on the south and Colorado on the west.

With a total land area of 213,096 square kilometers Kansas is abundant in natural beauty, historical sites and art and architecture and other beautiful attractions. 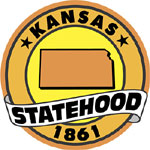 Kansas is known for its wonderful cities. The largest city of the state is Wichita. Wichita was founded on the site of an Indian Village and trading post. The city offers some worth visiting parks and zoos. The capital city of Kansas is Topeka. Topeka is the county seat of the Shawnee County that got its name from the Shawnee Indians. The charming city of Topeka is densely populated. It is the fourth most populated city in the state with an estimated population of 122,377.

Kansas is also popular for the Kansas City. The Kansas City is believed to be the Heart of America. The stockyards, saxophone player Charlie "Bird" Parker, museums, vibrant cultural festivals and events and some best barbecue in the world are evergreen lures to the city.

Kansas was first visited by a European in 1541. Francisco Vasquez de Coronado is deemed to be the first European who went to Kansas. In 1803 Kansas was affected by the Louisiana Purchase. Under the Purchase united states purchased several territories from France. As a result the Kansas territory also went under the United States of America.

In 1850 the Kansas territory witnessed its first American settlers. These Americans were abolitionists (members of the Abolitionist party) from Massachusetts who tried to eliminate slave trade and slavery from the world. During those days Kansas was an arena of pro-slavery and anti-slavery fights.

The population of Kansas increased to a great extent after the American Civil War came to an end as countless immigrants took refuge here.

On 30th may 1854 Kansas was established as a territory of the United States of America. This was due to the Kansas- Nebraska Act that became a law on that very day. When Kansas was declared a state the portion containing the present day territories of Denver, Colorado Springs and Pueblo was sectioned from Kansas. In 1827 the first community, Fort Leavenworth, was formed in the Kansas region.

On 29th January 1861 Kansas entered the union as a free state i.e. a state purged of slavery. Kansas became the 34th state to be a member of the union. Kansas was the foremost state of United States of America where alcoholic beverages were prohibited.

On 21st august 1863 William Qauntrill led Quantrill's Raid into Lawrence and wiped out a large part of the city along with killing countless city people.

Over the years Kansas has developed into an industrial and urbanized modern state. The economy of Kansas has registered a remarkable surge as the state government has shifted the focus to finance and service industries.