Origin of name: Based on Chippewa Indian word "meicigama" meaning "great water" and refers to the Great Lakes. 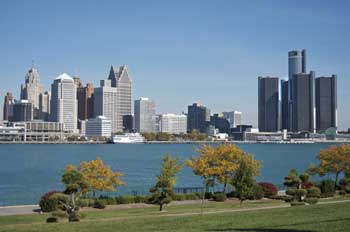 The place that has embraced the entire beauty of nature, wonderful treetops, beautiful spring season, apples and cherry blossom blooming in the rolling terrains, and much more, Michigan is no less than heaven on earth. The magnificent museums of this place, the vibrant festivals and exciting nightlife make Michigan a perfect dream destination. Besides breathtaking beauty Michigan offers various activities such as golfing, biking, bicycling, gaming etc. to entice its visitors all the more.

This picturesque place derived its name from the Lake Michigan, which in turn got its name from the Chippewa Indian word "mishi-gami" that means "great water". Michigan has an area of 96,716 square kilometers and is bordered by four Great Lakes. The state is known for its longest freshwater shoreline in the continental United States and the longest shoreline after Alaska. 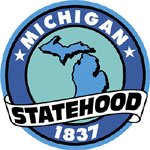 The capital of Michigan is the lovely city of Lansing. Lansing is the only state capital in United States that crosses the borders of the three countries. The largest city of the state is Detroit. Located on the Detroit River, Detroit is the county seat of Wayne County and is the 11th most populous city in United States.

The state of Michigan is not just significant as a tourist destination but is also quite important historically. On looking back over thousands of years we find that the land of Michigan was inhabited by different Native American tribes, most prominent among which were Ottawa, Chippewa and Potawatomi. These tribes had their separate areas to dwell and they co-existed peacefully on the territory of Michigan.

After the Native Americans, the land witnessed the European settlements. In 17th century French voyagers explored the area. In 1622 Etienne Brule's group visited the place while Father Jacques Marquette made the foremost European settlement in the region. He established a Jesuit mission at Sault Ste. Marie.

In 1701 French explorer Antonie de la Mothe Cadillac founded Detroit on the straits between the Lakes St. Clair and Erie. Antonie felt that foundation of Detroit would further strengthen the French control over the Upper Great Lake area. The French regime expanded further and by mid-eighteenth century they had invaded the forts at present day Niles and Sault Ste. Marie.

In 1763 Michigan came under the control of Great Britain. This happened after the French and Indian War that happened from 1754 to 1763. Due to the war French lost their North American Empire to the British.

Michigan served as a nominal part of Upper Canada after it was captured by the British during the war of 1812. It was in 1815 that the Congress of Vienna established Michigan again as a part of United States of America.

In 1912 Michigan was one of the few states that supported the third party candidate Theodore Roosevelt for the post of president. Lately Michigan has showed inclination towards the Democratic Party. This is because of the strong industrial and union heritage of the state.