Origin of name: Taken from the Spanish for the "color red" and was applied to the Colorado river. 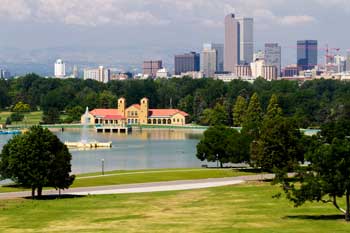 Ranked 8th in the world in terms of area and 22nd due to its population, Colorado is a western state in the central part of the United States. Like Wyoming and Utah, Colorado is also a place that has only latitude and longitude for borders. Colorado stretches from 37 degrees north to 41 degrees north and 102 degrees west to 109 degrees west.

The capital of the state is its largest city Denver also known as the Mile High City. Denver is located on the plains and is the county seat of and shares the same borders with, Denver County, one of the few consolidated city counties. Besides other things Denver is also a great reminder of Colorado?s rich and uneven past. 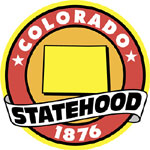 Without going into much detail about the prehistoric times and the foundation or discovery of the state, we find that before the Colorado Gold Rush and the organization of Colorado Territory from the western portion of Kansas, the eastern part of the Utah territory, the southwestern portion of the Nebraska Territory and a small area of the northeastern New Mexico Territory on 28th February 1861 several French, Spanish and American explorers and military expeditions as well as fur traders and trappers and early settlers had entered the land that later came to be reckoned as the state of Colorado. So the situation of Colorado was quite different in the early days particularly prior to the Colorado Gold Rush.

The period between 1832 and1856 witnessed numerous trading posts and small settlements being established on the banks of the Arkansas River. These settlements were also developed on the South Platte near the Front Range. Out of these the significant trading posts on the Arkansas were Bent's Fort and Fort Pueblo while on the South Platte were Ft. St. Vrain.

Till date this rush is deemed to be the greatest gold rush in the history of America. As a result of this Gold Rush there were large number of settlers in the region especially in the Denver area.

Soon in the Central City (county seat of Gilpin County) area gold as discovered and the population of the Denver city rose to 60,000. Due to mining work running successfully and happening at a large scale there many small towns were established but most of these were later abandoned when there was a downfall in this business. In 1972 Colorado became the only state to decline the award as the site of Olympics after they had been granted.

Over the years Colorado has progressed to a great extent. At present it is one of the hot vacation destinations of the world. The natural beauty of the state, the hillside glowing bright yellow with fallen aspen leaves, jagged and snow laden peaks of San Juans woo the heart of every visitor coming to the place.