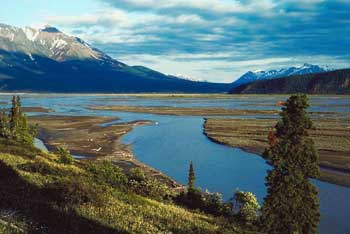 Crystal clear blue lakes, sturdy mountains, glaciers and raw and isolated land characterize the Yukon Territory, which is one of the Canada's northern territories in the extreme northwest region. The region offers its visitors a calm and tranquil atmosphere. It is due to the quiet ambience of the place that well-known poet Robert Service once referred to Yukon as "that raw-ribbed wild that abhors all life".

Due to its strategic location, American state of Alaska on the west, and British Columbia on the south, the Yukon Territory draws many visitors all round year as they pass from British Columbia to Alaska or from Alaska's panhandle to the interior of the state.

The capital city Yukon Territory is Whitehorse. With an area of 416.44 square kilometers, Whitehorse is also the largest city of the territory. Whitehorse is located several kilometers from Alaska Highway and is deemed to be the former terminus of the White Pass and the Yukon Route Railway from the Skagway, Alaska.

Besides the scenic beauty of the town the other pulls to the place are Miles Canyon, the SS Klondike sternwheeler, the MacBride Museum, the Old Log Church Museum, the Beringia Center, the beautiful Yukon Gardens, Log Skyscrapers, the Whitehorse fish ladder, the Yukon Wildlife Preserve and the Takhini Hot Springs.

The Yukon Territory has a glorious past. The region is popular for the controversial oldest remains of the human inhabitation in North America that are found here. Quite a few animal bones that are as old as 25,000 to 40,000 years have been discovered in the Old Crow area of northern Yukon.

In 1842 the fur trader Robert Campbell who had come from Fort Simpson explored the areas of southern Yukon and established Fort Frances on the France Lake in the Liard River Basin at the juncture of the Yukon River and the Pelly River.

The years that followed saw further growth and development of fur trade in the Yukon region along with the establishment of several new trading posts there. This also resulted in huge influx of miners and traders to this area. Due to this the Canadian government sent inspector Charles Constantine of the Northwest Mounted Police to take an account of the conditions of the Yukon district.

In 1897 Yukon witnessed the popular Klondike Gold Rush. It was an important event in the history of Yukon.

The population of the territory declined after the gold rush. During the Second World War the Alaska Highway was built. The highway opened up the territory to road traffic.

In 1978 Yukon got the responsible government, which led to the establishment of party politics.