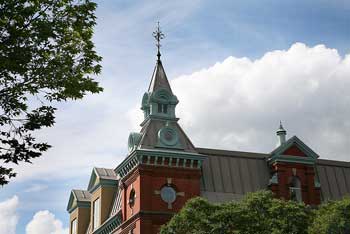 Also known as the Picture Province, the Canadian province of New Brunswick is a picturesque province that offers a variety of beautiful attractions to live up to its name.

On the north New Brunswick shoulders Quebec's Gaspe Peninsula and Chaleur Bay, the Gulf of Saint Lawrence and Northumberland Strait on the east, Isthmus of Chignecto on the south and the American state of Maine on the west. Along with Alberta, New Brunswick is another state to border a single US state.

The total area of the province is 72,908 square kilometers approximately which is almost equally divided between land and water. The southern part of the province lies on the Bay of Fundy and is famous for the Fundy National Park that covers beautiful coasts, lakes and cliff tops.

New Brunswick is known for the largest covered bridge in the world, which is at Hartland, northwest of the Fredericton. Fredericton is the capital of the New Brunswick the city is located at the bank of the big and beautiful Saint John River, in the heart of the province. This small Canadian city has everything one would look for. From natural beauty worth admiration to world-class attractions, vibrant cultural events, recreational activities and sports, this city has it all.

The largest city of the province is Saint John. It is also the oldest incorporated city in Canada. The city is fascinating with beautiful and vast landscapes, rivers, parks, picturesque telegraph poles, magnificent museums and city market.

Pondering over the history of New Brunswick it is revealed that the province has a glorious past. Till 16th century the New Brunswick region was inhabited and governed by the First Nations i.e. the indigenous peoples of north America who are now located in Canada.

In 1534 Jacques Cartier, a French explorer became the foremost European explorer to enter the area. He discovered and named the Baie des Chaleurs between the northern New Brunswick and the Gaspe Peninsula of Quebec.

At that time the entire region of New Brunswick was proclaimed to be a part of the royal French colony of Acadia.

In 1621 the British made a claim to the territory of New Brunswick. As a result King James I granted the present-day Nova Scotia, New Brunswick and part of Maine to Sir William Alexander. This entire region was called Nova Scotia at that time.

In 1713 the War of Spanish Succession ended with the Treaty of Utrecht. This treaty gave the control of the Nova Scotia region to the British. This complete area was later known as the New Brunswick province.

During the Seven Years of War the New Brunswick region came under the British control. After the War it was incorporated in the Sundbury County in the colony of Nova Scotia.

Soon the British administrators decided to split the Nova Scotia colony. This led to the official creation of the Province of New Brunswick by Sir Thomas Carleton on 16th August 1784. New Brunswick was named after the British monarch King George III.