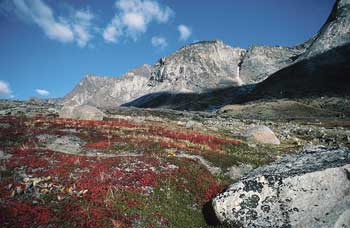 The latest and the largest of Canadian territories, Nunavut, has much more to offer than expected. Though the territory got established in 1999 yet its ambience is quite historic and culture abiding.

Nunavut comprises of most of the arctic islands and all the islands in the Hudson Bay, James Bay and Ungava Bay that were earlier associated with the Northwest Territories. Nunavut shoulders some islands plus the mainland and small border area with Newfoundland and Labrador.

To all its visitors Nunavut serves with a heavy dose of fun and excitement. The territory boasts mind blowing natural beauty, a variety of activities such as snowmobiling, kayaking amongst the icebergs, unique art and craftwork, wonderful wildlife which includes polar bears, seals, caribou, whales and walrus and numerous birds of different species.

The capital city of this province that spreads in an area of 2,093,190 square kilometers is Iqaluit. Iqaluit is located in the hills rising from the Koojesse Inlet. Earlier Iqaluit was known as the Frobisher Bay. The city is growing in terms of population, economy and the standard of living of people.

Worth watching the city is its latest airport, St Judes Anglican Cathedral which has the shape of a igloo and is embellished with local crafts, the Baffin Regional Visitors Center that best reflects South Baffin's life and culture, the Sunaquatangit Museum which presents a wonderful collection of Intuit sculptures, prints and artifacts and the Katannilik Territorial Park Reserve.

The history of Nunavut is as interesting as the various lures offered by it. The region has witnessed continuous population for around 4000 years. It is believed that the inhabitants of Nunavut were in contact with Norse sailors.

In 1576 while on his way to discover the Northwest Passage, it appeared to Martin Forbisher that he had found gold in the present day's Frobisher Bay on the coast of Baffin Island.

Though the ore turned out to be useless yet it indirectly led Frobisher to establish links with the Inuit. In 17th century several other explorers such as Henry Hudson, William Baffin and Robert Bylot went in looking for the Northwest Passage.

In 1976 the Canadian government and the Inuit Tapirisat of Canada held discussions regarding the establishment of a new territory. After polling that took place in 1982 and went in favor of the federal government, an agreement was reached in 1992.

In 1993 the Canadian government passed the Nunavut Land Claims Agreement Act and the Nunavut Act. On 1st April 1999 the transition of the land was completed.

Nunavut has not got the status of a province till date. One big obstacle in this is the sparse population of the territory.