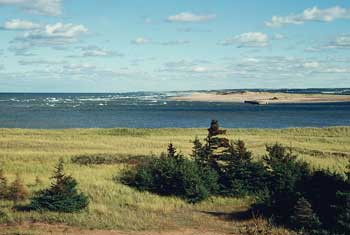 The Canadian province of prince Edward island (PEI) is located in the Maritimes. With a mere area of 5,660 square kilometers and a population of 137,900 approximately the province is smallest in terms of area as well as population.

One half of this beautiful province is covered with forests while the agriculture is the main occupation of the local people here. The province offers ample of beaches, golf courses, eco-tourism adventures, vibrant festivals and wonderful countryside areas.

Also known as the Garden Province the island is situated in the Gulf of Saint Lawrence, east of new Brunswick and to the north of new Scotland. The island is most popular because of the tale of Anne of Green Gables that hangs behind it.

As narrated by famous writer Lucy Montgomery, the story is of a little girl Anne growing up in the Green Gables area of Prince Edward Island.

The Green Gables area which nestles the Green Gables House is one of the most exciting tourist destinations of PEI these days. Visitors enjoy the timeless qualities discovered by Montgomery in the island.

The capital city of PEI is Charlottetown. With an area of 44.33 square kilometers Charlottetown is also the largest city of the province. More the half of the island's population lives in this town. The city boasts a unique and diverse collection of resources and facilities from shopping, dining to sports and culture.

The Charlottetown city has a great significance in the history of PEI. The city is known to be The Birthplace of Confederation as it was here that the first meeting of the Fathers of Confederation took place. Moreover the very name of the city reminds of the great Queen charlotte of England, who gave the city its name.

If you want to take a look at the real PEI, the city of Naufrage is the best option. Naufrage is a calm and quite bayside village on Prince Edward Island. Apart from the scenic beauty the main attraction of the place is to watch seals swimming in the ocean. Visitors can also enjoy the scenic hikes and nature trails in the park that even includes a playground and relish a variety of activities and sun bathing at the beach and the bay.

Prince Edward Island has a rich history too. The original inhabitants of the island were the Mikmaq people. The island was then named Abegweit which means Cradle on the Waves.

For a long time the island was a part of the French colony of Acadia. In 1798 the island's name was changed from St. John's Island to Prince Edward Island. This name was altered by Great Britain in order to distinguish the island from several other islands of the same name. The island was so named to honor the fourth son of King George III and the father of Queen Victoria, Prince Edward Augustus.

After hosting the very first meeting of Confederation i.e. the Charlottetown Conference, in 1864, Prince Edward's Island is popularly known as Birthplace of Confederation.