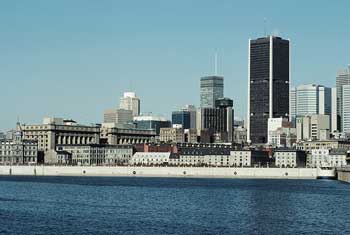 Spreading in an area of 366. 02 square kilometers Montreal by far is the second largest city of Canada and the largest city in the province of Quebec. Montreal is also the eighth largest metropolitan area in North America and is 77th in the world.

Montreal lies in the southwestern corner of Quebec, few miles away from the Quebec City which is the capital of the Quebec province. The population of the city is 1,583,590 approximately, which makes it the second most populated city of Quebec.

The Montreal city is known for its unique lifestyle and culture. The people of the city believe in the phrase "joie de vivre" which means "joy of living". The charismatic natural beauty of the city, big restaurants, cafés, cuisine and exciting nightlife add to the enticement of Montreal. Another unusual feature of Montreal is its seasons.

The hot and humid summers, cool breeze and falling leaves in autumn and snowy winters, make a visit to this city a pleasant experience all round the year. Besides this the distinguished thrilling festivals and events of the city are an outstanding experience for the visitors.

History reveals that in the beginning the region was under the control of tribes such as Huron, Algonquin and Iroquois. These tribes ruled over the place for some eight thousand years. It is believed that Jacques Cartier was the first European to enter the region. On 2nd October 1535, Jacques came to Hochelega, on the island of Montreal.

In 1639 there was first permanent European settlement on the island of Montreal. It was established by a Frenchman named Jerome Le Royer. Since the beginning the Iroquois people were defending their land against the establishment of fur trading posts. They had successfully opposed the La Place Royale fur trading post in 1611 and continued their attacks till a peace treaty was signed in 1701. Till 1760, the Montreal region served as a base for France after which it was handed over to the British army.

After the Treaty of Paris in 1763, the city had come under the governance of American Revolutionists for a brief period. As the Americans left, the British immigration began in the region. This was accompanied by tremendous increase in the fur trade business.

In 1832 Montreal was incorporated as a city. From 1844 to 1849 Montreal served as the capital city of the United Province of Canada. Gradually Montreal became the largest city in the British North America and the economic and cultural hub of Canada.

The city suffered greatly during the First World War, at the time of Great Depression and during the Second World War. However over the years Canada recovered from the losses so encountered. The population of Montreal also increased and along with this the city witnessed several other developments.