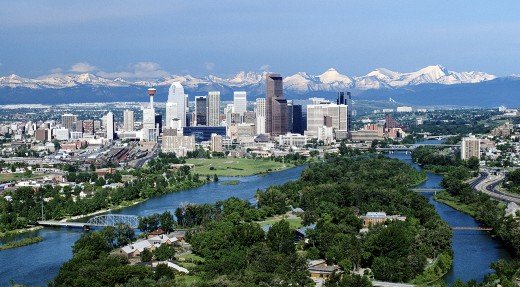 The Alberta province embraces all the grandeur and beauty nature can offer. The visitor's are bewitched by the vast blue skies and the snow capped Rocky Mountains, extensive farmlands and dense forests. Most prominent in Alberta are water bodies. There are several lakes and rivers ideal for swimming, water skiing, fishing and other delightful water sports.

But what attracts the visitors more to this province is the amazing hospitality of the natives. The people of Alberta are not amiable, hardworking, casual by nature but they possess a deep sense of community and social life too.

Edmonton is the capital of Alberta. Edmonton is located just south of the center of the province. The city features globally acclaimed attractions such as West Edmonton Mall, the world?s largest mall and one of the liveliest communities in North America.

The largest city of the province is Calgary. Calgary is the home to the world famous Calgary Exhibition and Stampede. Calgary is densely populated. With a population above one million this city is also rich in natural beauty, appealing sites and other attractive activities. Calgary is a famous destination for winter sports and ecotourism. Visitors must go to the popular Calgary Tower, visit the Heritage Park Historical Village, Canada Olympic Park, the Calgary Zoo, Botanical Gardens and the Prehistoric Park.

On tracing the origins of the Alberta we find that at one point of time the province was inhabited by some Aboriginal tribes. In eighteenth century European travelers came to the region. They had come for the purpose of fur trade.

For a long time the province was a tug of war between the French and the British. However the dispute ended with the establishment of a trading post near Edmonton.

The formation of Canada took place in 1867 but Alberta was not properly founded till then. The Alberta region was well founded and came to prominence with the North West Mounted Police establishing its presence in the area. In 1905 Alberta was declared as a province of Canada.

Sir Frederick Haultain, a lawyer and also a member of the Council of the Northwest Territories, made a great contribution in establishing Alberta as a Canadian province.