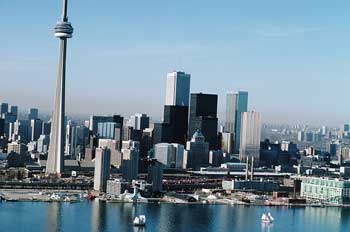 The most populated and the second largest area amongst the ten Canadian provinces, Ontario has everything from green wilderness to urban adventures. The region offers a plethora of events and activities all round the year. Ontario is unique with its wonderful natural aura and excitement.

The huge size of the province (1,076, 395 square kilometers) leads to different seasons in its different regions. To the north Ontario is bounded by Hudson Bay and James Bay, on the east is the Quebec, Canadian province of Manitoba on the west and the American states of Minnesota, Michigan, Ohio, Pennsylvania and New York on the west.

With a coastline that passes through the four Great Lakes and nearly 250,000 lakes and more than 10,000 kilometers of rivers, Ontario province is primarily characterized by water and water related activities.

With abundance in beauty and recreational sports, the province is rich in history too. For a long time the region was a home to the Algonquian and the Iroquoian tribes. After them came the European settlers. In 1610 the French explorer Etienne Brule explored the area. In 1611 Henry Hudson, the English explorer sailed in the region followed by Samuel de Champlain in 1615 and other French missionaries.

The tussle over the domination of Ontario began in 17th century when British establishing its trading posts on the Hudson Bay. Due to the Seven Year's of War all France's North American possessions were ceded to Britain. In 1774 the region was annexed to Quebec.

The Constitutional Act of 1791 led to the bifurcation of the Quebec region between the Upper Canada which is southwest of the St. Lawrence Ottawa River confluence and the Lower Canada to the east of it.

The Upper Canada region which was under the governance of John Graves Simoce was captured by American army in the War of 1812. Though the Americans were successfully opposed and ousted by the British and Native American forces yet they managed to acquire the region of Lake Erie and Lake Ontario. The end of the War of 1812 also led to many immigrant settlements in the Upper Canada region.

The Upper and the Lower Canada were rejoined as Province of Canada after the Act of Union in 1840. Ontario was then known as the Canada West. In 1848 the parliamentary self-government was established in the area.

On 1st July 1867 the British North America Act took effect that resulted in the establishment of the Dominion of Canada with only four provinces in the beginning. These provinces were Nova Scotia, New Brunswick, Quebec and Ontario. At the same time the province of Canada was also divided into Ontario and Quebec in order to provide separate land to each linguistic group.

Toronto was then established as the capital of the Ontario province. At present Toronto is famous and lively metropolitan area with dense population. It is regarded as the most ethnically diverse city in entire North America today.

The city is known for the CN Tower which at present is the tallest free standing structure in the world. Besides Toronto offers some of the world-class museums and art galleries, delectable cuisine, rocking music and pulsating nightlife.