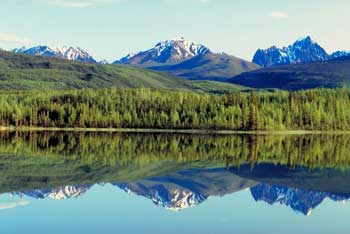 Located in the northern Canada, to the east of Yukon, west and south of Nunavut and north of British Columbia, Alberta and Saskatchewan is a territory of Canada that offers years round fun and excitement.

The summers are long and full of water recreation, spring is meant for trips to the edge of the ice flow and several other activities in the snow whereas autumn and winter season are best to experience the beautiful Northern Lights.

The Northwest Territories will welcome you with some huge worth visiting national parks such as Nahnanni National Park, magnificent museums and archaeological sites and beautiful and large lakes and rivers.

Yellowknife, a colorful town with delightful culture and society is the capital of the Northwest Territories. With an area of 105.20 square kilometers it is also the largest city of the region. The city is situated on the north shore of the Great Slave Lake and on the west side of the Yellowknife Bay, close to the Yellowknife River. These areas are called Yellowknife after the copper knives used by the local people.

The creation of the Northwest Territories took place in 1870 after the Hudson Bay Company gave away the Rupert's Land and the North-Western Territory to the Canadian government. This was a big area that comprised of several different regions. Most of the present day Canada excluding the British Columbia, the coast of Great Lakes, the Saint Lawrence River Valley, the Newfoundland and Labrador coast. The southern part of the Baffin Island was included in the Territories.

The territory got its current name after the North-Western Territory, an area so called due to its geographical location relative to Rupert's Land.

After sometime the territories were separately carved. On 15th July 1870 the province of Manitoba was created. British Columbia was also granted a portion of North-Western Territories. In 1905 Alberta and Saskatchewan were also created and their capitals were designated.

In 1876 the District of Keewatin was segregated from the middle of the territory. In 1882 and 1886 and the years that followed the rest of the territory was also partitioned into many districts such as Athabaska, Franklin, Assiniboia, Yukon, Mackenzie, Ungava etc.

Since the Canadian constitution divided in 1982 several native people made their claims and headed towards courts and the federal government. In 1992 the people living in the Northwest Territories voted in favor of division of territory along the ethnic lines, with the Intuit in the east and the Dene in the west.

On 1st April 1999 the new territory of Nunavut came into existence. It was governed by the Intuits. This resulted in a split in the Northwest Territories along the zigzag line running from the Saskatchewan- Manitoba borders through the Arctic Archipelago to the North Pole.